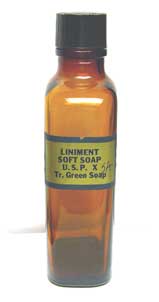 How to Make Green Soap
" Linseed Oil, four hundred grammes [or 14 ounces av., 48 grains]; Potassium Hydroxide, ninety-five grammes [or 3 ounces av., 154 grains]; Alcohol, forty cubic centimeters [or 1 fluidounce, 169 minims]; Water, a sufficient quantity. Hsat the Linseed Oil in a deep, capacious vessel, on a waterbath or steambath, to a temperature of about 70° C. (158° F.). Dissolve the Potassium Hydroxide in four hundred and fifty cubic centimeters [or 15 fluidounces, 104 minims] of Water, warm the solution to about 70° C. (158° F.), add it to the Linseed Oil, and mix thoroughly; then incorporate the Alcohol and continue the heat (without stirring) until a small portion of the mixture is found to be soluble in boiling Water without the separation of oily drops. Then allow the mixture to cool, and transfer it to suitable vessels. The Potassium Hydroxide used in this process should be of the full strength directed by the Pharmacopoeia (85 percent.). Potassium Hydroxide of any other strength, however, may be used, if a proportionately larger or smaller quantity be taken, the proper amount for the above formula being ascertained by dividing 8075 by the percentage of absolute Potassium Hydroxide contained therein." U. S. The above process was first introduced into the U. S. P. 1890 with the view of affording a soft soap for medicinal purposes which shall be of uniform strength. Domestic soft soap is prepared on the same general principles as hard soap, potassium hydroxide being employed as the alkali, and a fatty matter, rich in olein, as the oil. The French soft soap is made with the seed oils, such as rape seed, hemp seed, etc.; the Scotch and Irish, with fish oil and some tallow, and our own, with refuse fat and grease. A lye of wood ashes is the form of potassium usually employed. In forming this soap it is necessary that it should continue dissolved in the alkaline solution, instead of being separated from it. Hence soft soap is a potassium soap completely dissolved in the solution of its alkali, which is present in excess. As made in this country, it is usually semifluid, slippery, capable of being poured from one vessel to another, and of a dirty brownish-yellow color and varying strength.

Properties.—It is officially described as " a soft, unctuous, yellowish-brown mass, having a characteristic odor and an alkaline taste. An aqueous solution shows an alkaline reaction to red litmus paper. If to a solution of 5 Gm. of Soft Soap in 50 Cc. of water, 2 drops of phenolphthalein T.S. be added, not less than 2.3 Cc. nor more than 4.5 Cc. of tenth-normal oxalic acid V.S. should be required to discharge the red tint (limit of free alkali). Soluble in hot water to a nearly clear liquid; also in hot alcohol without leaving more than 3 percent, of insoluble residue." U. S. "Yellowish-white, sometimes yellowish-green, almost inodorous, of an unctuous consistence. Readily soluble in alcohol (90 per cent.), especially on warming, the liquid, on filtration, yielding not more than 3 per cent, of residue (limit of potassium carbonate, insoluble soaps, etc.). It should not contain more alkaline hydroxide or carbonate than is allowed under' Sapo Animalis.' It does not impart an oily stain to paper (absence of free oil). Incinerated it yields an ash which is very deliquescent, and which should afford no reaction with the tests for copper." Br.

For more than one hundred years, under the name of " green soap," there has been used in Europe a soap made by saponifying linseed, rape seed, or other vegetable oils with various refuse oils, usually including fish oils, an excess of potassium hydroxide, and a little sodium hydroxide. The green color of this soap was probably due to the presence of chlorophyll in. the impure vegetable oils used. This green soap, or so-called " German soap," was formerly imported into America, but at present has been almost entirely superseded by soft soap made in this country, from which it does not differ in the nature of its active constituents or in its therapeutic properties.

If a green soap be wanted, it may be made by the process given in the footnote. The soft soap of France, formerly the savon vert of the French Codex, has a greenish color and usually the consistence of a soft ointment. It is made of hemp seed oil, or sometimes of the dregs of olive oil, and potassium hydroxide. G. M. Beringer (Proc. A. Ph. A., 1903, 420) prefers to use Malaga olive oil in making green soap and M. I. Wilbert (Proc. A. Ph. A., 1904, 228) extracts the green coloring matter from hemp seed by macerating 25 parts of ground hemp seed with alcohol and obtains 100 parts of a tincture; by substituting an equal measure of this tincture for the quantity of alcohol used in the official process, a green soap can be made, which will have the color which is regarded by some as a very important characteristic.

Uses.—Soft soap is used in medicine almost exclusively in the treatment of eczema rubrum, although sometimes used in other diseases of the skin in which a very powerfully stimulant application is desired. It acts chiefly by virtue of the excess of potassium hydroxide, which enables it to destroy fatty matters rapidly, to remove exudation, and to affect the nutrition of the skin. The tincture, the form in which it is usually employed, may be well rubbed upon the part, either in full strength or diluted, and immediately afterwards the skin must be well washed to remove the alkali, and then zine oxide or other bland ointment applied.
Off. Prep.—Linimentum Saponis Mollia, U. S. (Br.); Linimentum Terebinthinae, Br.

"German Soft Soap."—B. B. Shuttleworth has furnished the following process for its preparation. " In a clean pot or dish, preferably of iron or copper, and capable of containing at least three times the quantity, put one part by weight of linseed oil; heat gently, and add, in two portions, three parts In all, by measure, of liquor potassae, U. S. P. or B.P.,

Providing either come up to the standard requiring .8 and 5.84 per cent, of potassium hydrate. Boil quietly and stir frequently until the mass becomes clear, which with four ounces of oil and twelve Dunces (fluid) of liquor will require about one hour, and with ten pounds of oil about five hours. If, during the process, the mass becomes too thick to stir easily, add a little water. Allow the soap to become cool, but, before it sets, work in the coloring matter, which must be previously prepared by boiling finely-powdered indigo with water until the color is formed into a thin paste. Twenty grains of indigo, boiled with one and a half ounces of water until the mixture is reduced to about one drachm, will answer for the soap from four ounces of oil. The soap must not be too hot, nor must it be rebelled after adding the coloring matter, or the green will be destroyed." (Can. Pharm. Journ., June, 1878.)

This information was taken from....
The Dispensatory Of The United States Of America
By Dr. Geo. B.Wood And Dr. Franklin Bache.
Nineteenth Edition.
Thoroughly Revised, Largely Rewritten, And Based Upon The Eighth Decennial Revision Of The United States Pharmacopoeia Issued June 1, 1907.
Philadelphia And London
J.B. Lippincott Company