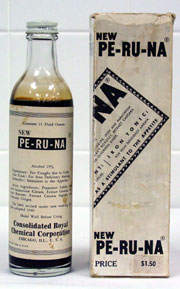 To the right is a multi-purpose Cough and Cold Preparation from 1946. It was used as an expectorant for chest congestion; an Iron Tonic for iron deficiency anemia; and as a stomach to stimulate the appetite. The main ingredient is Potassium Iodide, which is the expectorant. The preparation also contains ginger extract, which has a soothing effect on the stomach. The Consolidated Royal Chemical Corporation of Chicago, Illinois produced PE-RU-NA. An 11-ounce bottle sold for $1.50 in 1946.
Cough and cold medications used to contain a variety of expectorants such as pine tar, terpin hydrate, (Commonly misspelled as turpin hydrate), and potassium iodide. They also contained decongestants such as actual amphetamines. Often the cough suppressant was codeine or some other morphine derivative.

Cough syrups used many ingredients such as licorice or horehound. These medicines came in bottles with corks and during prohibition actually had liquor tax stamps if they contained alcohol, which most did.
Interestingly, most of the old cough remedies actually worked as well if not better than the current ones. Over the years the FDA has caused many ingredients to be removed from the market place. For example the only expectorant still available is guaifenesin. There used to be many available. The old ones were removed because no pharmaceutical company was willing to spend the money to conduct the expensive studies required by the FDA. 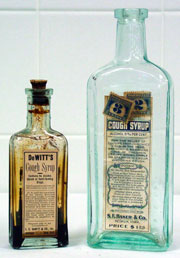