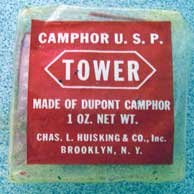 Gum Camphor made by Tower from Dupont bulk from the 1950's

This is Tower gum of camphor made by the Chas. L. Huisking & Co., Inc. located in Brooklyn, New York. The Camphor USP was made of Dupont camphor and was purchased in the early 1950's.

This information has been taken from the United States Dispensatory Wood-Osol 23rd Edition 1943. The information contained is for historical purposes only.

"Camphor is a ketone obtained from Cinna-momum Camphora (Linne) Nees et Ebermaier (Fam. Lauracecz) (Natural Camphor) or pro-duced synthetically (Synthetic Camphor)." U. S. The definition in the Br. is essentially the same as in the U. S., excepting that the former specifies that natural camphor is purified by sublimation and that synthetic camphor is made from pinene through the intermediary of camphene.

Although both the British and United States Pharmacopoeias recognize natural and synthetic camphor under the same title there seems to be little doubt that the lasvogyrate camphor is more potent than the dextro camphor and consequently racemic synthetic camphor must be more power-ful than the natural. The experiments of Hazard (7. P. C., 1936, 24, 118) and of Christensen (/. A. Ph. A., 1937, 26, 786) indicate that the synthetic is about 25 per cent more toxic than the natural.

The term camphor was originally applied to two products which came from China into Eu-rope about the thirteenth century. From the writings of the famous Venetian traveler Marco Polo, it seems probable that the Chinese did not confuse these two substances as the early Europeans appear to have done. The use of camphor in Asia goes back at least as far as the sixth century and probably much earlier.

The two substances which were known to the ancients as camphor were the products respec-tively of the Dryobalanops Camphora (see Borneol, Part II), which was probably the more ancient, and of the Cinnamomum Camphora (Fam. Lauracece). Subsequently the term was applied to various stearoptenes which bore no close chemical or medical relation.

The supply of natural camphor is far from adequate to meet the commercial demand Since the introduction of synthetic camphor this prod-uct has achieved a great commercial importance, although only in recent years has it come into use medicinally. As turpentine is used as the starting point in the synthesis of camphor the price of the artificial product cannot fall low enough to entirely displace the natural camphor.

The camphor tree {Cinnamomum Camphora) is an evergreen which sometimes attains great size, having the aspect of the linden, with a trunk straight below, but divided above into many branches, which are covered with a smooth, greenish bark. Its leaves, which stand alternately upon long foot-stalks, are ovate-lanceolate, entire, smooth and shining, ribbed, of a bright yellowish-green color on their upper surface, paler on the under, and two or three inches in length. The flowers are small, white, pediceled, and collected in clusters, which are supported by long axillary peduncles. The fruit is a purple, one-seeded drupe, resembling that of the cinnamon. The camphor tree is a native of China, Japan, and adjacent portions of east-ern Asia, but is capable of cultivation in most sub-tropical countries, where the minimum winter temperature is not below —6.6° C., and the sum-mers are warm. The chief obstacle to its cultiva-tion seems to be the extreme slowness of growth of the tree, and the corresponding slowness of returns from the investment. For an account of cultivation in Florida see True and Hood, Proc. A. Ph. A., 1909, p. 719.

About 80 per cent of the world's supply of natural camphor comes from the island of For-mosa and most of the rest from Japan and China. The amounts produced in India and in Florida are too small to be of commercial sig-nificance. During 1939 there were imported over 818,055 pounds of refined camphor from Japan. Large quantities are made synthetically in the United States since 1933, the plant at Deep-water, N. J., having an annual capacity of about 4,500,000 pounds.

In Japan and Formosa the drug is obtained .chiefly from the root, trunk and branches by the process of sublimation, but in the American plantations the leaves and small twigs are util-ized, thus avoiding injury to the trees. Only the older trees are employed; indeed, it is said that a tree must be fifty years old before it should be considered available. In the province of Tosa, in Japan, the method of obtaining cam-phor, as reported by Dewey (Circular 12, U. S. Dept. of Agric., Div. of Botany), is to pass a current of steam through chips of the camphor tree, the volatilized camphor being conducted through a bamboo tube into a condensing chamber which is kept cool by water falling on the top and running down over the sides. The upper part of the air chamber is sometimes filled with clean rice straw, on which the camphor crystallizes, while the oil drips down and collects on the surface of the water. In some cases, the camphor and oil are allowed to collect together on the surface of the water, and are afterwards separated by nitra-tion through rice straw or by pressure. By this method 20 to 40 pounds of chips are required for 1 pound of crude camphor. In China the com-minuted plant is said to be first boiled with water until the camphor adheres to the stick used in stirring, when the strained liquor is al-lowed to cool, and the camphor which concretes, being alternated with layers of earth, is sub-mitted to sublimation. In the island of Formosa, a current of steam is passed through the chips and the volatilized camphor condensed on earthen-ware pots. The crude camphor is taken to the towns in baskets and then put into large vats, with holes in the bottom, through which a volatile oil, called camphor oil, escapes; it is much used by the Chinese for medicinal purposes. It is said that of recent years hydraulic pressure is largely substituted for drainage.

Crude camphor is of a pinkish color and of a softer consistency than the refined. It is puri-fied by mixing it with about one-fiftieth of its weight of quicklime and heating in an iron ves-sel, first to a temperature of about 100° C. which drives off the water and volatile oil. After-wards the vessel is connected with a, suitable receiver and heated to a temperature of 175° to 200° C. which causes the camphor to sublime, the vapors condensing in the receiver. It is re-fined both in Japan and in the United States.

Synthetic Camphor.—Camphor is chemically related to pinene, the principal constituent of turpentine, and it is with this natural substance that the synthesis of camphor begins. Pinene is prepared by fractionally distilling turpentine. This, after careful drying, is converted into bornyl chloride (also called pinene hydro chloride, and technically known as ''artificial camphor") by treatment with dry hydrochloric acid gas. This solid is then converted into camphene, the process being one which is covered by many patents. The conversion may be effected by basic substances (phenol, cresol, aniline, alkali, etc.) which remove hydrochloric acid and cause molecular rearrangements, and the camphene may be directly converted into camphor by oxi-dation (ozone, oxygen, potassium permanganate, and other oxidizing agents being used).

More suitable for large scale operations, how-ever, is the process which involves the follow-ing additional steps: Beginning with camphene, glacial acetic acid is used to convert this sub-stance to isobornyl acetate. This is then sep-arated and converted into isoborneol by saponi-ftcation by alcoholic sodium hydroxide. Iso-borneol, after purification, is oxidized by nitric and sulfuric acids mixture to camphor. An ex-cellent resume of the chemical as well as the economic aspects of the camphor industry is to be found in an article by Gubelmann and Elley (/. /. and E. C., 1934, 26, 589).

Synthetic camphor possesses the chemical properties of natural camphor but differs in op-tical activity; the former occurs almost always as the racemic variety.

Description and Tests.—"Camphor occurs as colorless or white crystals, granules, or crystal-line masses; or as colorless to white, translucent, tough masses. It has a penetrating, character-istic odor, a pungent, aromatic taste, and is read-ily pulverizable in the presence of a little alcohol, ether, or chloroform. It slowly volatilizes at ordinary temperatures. One Gm. of Camphor dissolves in about 800 cc. of water, in 1 cc. of alcohol, in about 0.5 cc. of chloroform, and in 1 cc. of ether, at 25° C. It is freely soluble in carbon disulfide, in purified benzin, and in fixed and volatile oils. The specific gravity of Cam-phor is about 0.990 at 25° C. Camphor melts between 175° and 179° C. The specific rotation [a]f§ of Natural Camphor, determined in a solution containing 10 Gm. of Camphor in suffi-cient alcohol to make 100 cc. and using a 200-mm. tube, is between +41° and +43°.

"Moisture.—A solution of Camphor in petro-leum benzin (1 in 10) is clear. Non-volatile matter.—Gradually heat 2.0 Gm. of Camphor: it sublimes without carbonization and without leaving more than 0.05 per cent of non-volatile matter. Halogens.—Mix 0.1 Gm. of finely di-vided Camphor with 0.2 Gm. of sodium peroxide in a clean, dry, hard glass test tube of about 25 mm. internal diameter and 20 cm, length. Sus-pend the tube at an angle of about 45° by means of a clamp placed at the upper end, and gently heat the tube, starting at the upper end and gradually bringing the heat toward the lower part of the tube until incineration is complete. Dis-solve the residue in 25 cc. of warm distilled water, acidify with nitric' acid, and filter the solution into a comparison tube. Wash the test tube and filter with two portions of 10 cc. each of hot distilled water, adding the washings to the filtered solution. Add to the filtrate 0.5 cc. of tenth-normal silver nitrate, dilute with distilled water to 50 cc., and mix thoroughly. The tur-bidity is no greater than that produced in a con-trol test with the same quantities of the same reagents and 0.05 cc. of fiftieth-normal hydro-chloric acid." U. S.

The description and physical properties in the Br. are essentially the same as those in the U. S. Directions are included in the Br. for the sterili-zation of camphor solutions by heating in an autoclave, or by Tyndallization; precautions against loss of camphor by volatilization are necessary.

Camphor has a peculiar, strong, penetrating, fragrant odor, and a bitter, pungent taste, and a slight sense of coolness. It is possessed of a tenacity which renders its reduction to a fine powder very difficult unless its cohesion be over-come by the addition of a minute proportion of alcohol, ether, chloroform, glycerin, essential or fatty oils, or other liquid for which it has an affinity. The fracture of camphor is shining, and its texture crystalline. When thrown in smaYL fragments upon water, it assumes singu-lar circulatory movements, which cease ip

Leo and Rimbach found that the solubility of camphor in pure water falls with rise of tem-perature. (/. Soc. Chem. Ind., 1919, 38, 738A.) Carbon dioxide increases the solvent power of water, as does also the spirit of nitrous ether. 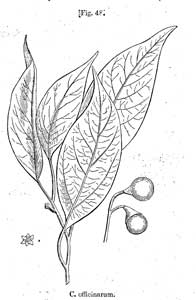 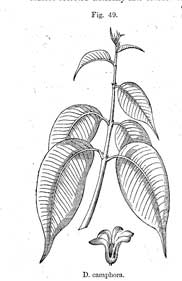