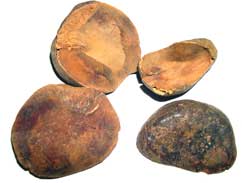 The Cola nitida (Vent.) Schott and Endlicher {Cola acuminata Schott and Endlicher; Sterculia acuminata Beauv.) is a large tree, somewhat re-sembling an apple tree, indigenous to Guinea in western tropical Africa. It is largely cultivated in the West Indies and South America, especially in Brazil, for the sake of its seeds, the present commercial supply of these coming chiefly from the Western Hemisphere. Its leaves are alter-nate, petiolate, coriaceous, with obovate blades 4 to 6 in. in length, the older entire, the younger frequently incised once or twice near the base. The yellow flowers occur in axillary and terminal panicles. The fruit consists of 5 woody follicles, each of which contains 1 to 3 large white or crim-son seeds, about the size and shape of horse-chestnut, the kernels of which deprived of their seed-coats have long been used by the natives of Africa as a caffeinic stimulant under the name of guru nuts. It is stated that the negroes of Brazil use the seeds of the Sterculia chica A. St. Hil. and of the 5. striata A. St. Hil. for similar purposes.

Three varieties of kola nuts are said to be the product of Cola nitida. The most valuable, the kola of Sakhala, is the largest, and is of a white color. The kola of Kassi, of Siarra, and of Toute, is of medium size, red or white. The kola of Maninian is small and red. Of the white kola there are two varieties, one whitish, resem-bling the kola of Sakhala but smaller; the other more or less rose-colored and larger. For further information on the botanical sources of kola see Farwell (A. J. P., 1922, 94, 428).

During 1940, there were imported into this country through the New York customs district 1,016,794 pounds of kola nuts from Jamaica, Brazil, Nigeria and Liberia.

Description.—"Unground Kola.—Irregularly plano-convex or somewhat globular, and from 2.5 to 5 cm. in length; heavy, hard and tough; reddish black to light brown, smooth or somewhat wrinkled; edges slightly incurved and sharp.

"Powdered Kola.—Color light brown to mod-erate yellowish brown; odorless; taste mildly astringent; numerous starch grains, some of which show alteration, the normal grains up to 45 microns in diameter, the smaller ellipsoidal or spherical, the larger ellipsoidal or irregularly ob-long and occasionally with a protuberance on one side; many of the larger grains show lamellae and a circular hilum or a fissure through the center; parenchyma cells numerous, about 65 microns in diameter.

"Assay.—Weigh accurately 12 Gm. of Kola, in fine powder, and proceed as directed in the assay of Guarana. The weight obtained repre-sents the yield of anhydrous caffeine, CsHio02N4, from 10 Gm. of Kola." N. F.

Adulterants.—The so-called male kola is dis-tinct from kola, being said to be the fruit of a small tree, Garcinia Kola (Fam. Guttiferd), and containing no caffeine. The fruit is oblong, about one and a half to three inches long and from three-quarters to one inch broad; it is trigonal in section with a readily removable thin testa of a reddish-yellow to dark brown color, covered by markings which resemble those on the seed coat of the nutmeg. It is bitter and astringent. In the section the microscope reveals a number of resinous masses surrounded by cells rich in starch.

Constituents.—The chief constituent of kola which is of medicinal importance is caffeine, but there is present also traces of theobromine. Rosenthaler (Pharm. Acta Helv., 1935, 10, 90), expressing his results in terms of "purine bases," found an average of 1.73 per cent in Jamaica kola, and 1.33 per cent in Madagascar kola. The caffeine, in the fresh kola nut, is not present as the free base. Casparis (Pharm. Acta Helv., 1929, 4, 181) obtained from fresh kola nuts a crystalline compound of caffeine and kola-catechin in molecular proportions. In the commercial dried seeds, most of the kola-catechin has been converted into red oxidation products (kola-red). Casparis found no evidence of the presence of a caffeine tannoglucoside, such as had been re-ported under the name of kolanin by Knebel (1892).

The substances referred to in the literature as kolatin, kolatein, and kola-catechol, Freudenberg (Ann. Chem., 1930, 483, 140) has identified as

Uses.—The effect of kola nuts, as they ap-pear in European commerce, is indistinguishable from that of the other caffeinic drugs. Gehlen (A. E. P. P., 1934, 174, 695) made a physiolog-ical study of the three chief constituents of kola nuts. He found that kola-red has marked astrin-gent properties; kola-catechin is not astringent but in large doses it exerts a veratrine-like effect on the muscles; the general action of the whole nut is scarcely distinguishable from that of caffeine. It is about equivalent to guarana, tea, coffee, etc., and may be substituted for them.