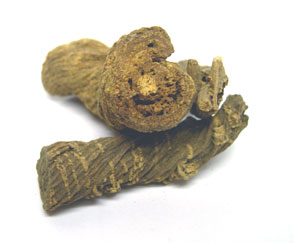 “Phytolacca is the dried root of Phytolacca, americana Linne (Fam. Phytolaccaced). Phytolacca contains not more than 5 per cent of attached stem-bases and not more than 2 per cent of other foreign organic matter, and yields not more than 2 per cent of acid-insoluble ash.” American Nightshade Root; Scoke; Pocati. Radix Phytolaccse. Fr. Racine de phytolaque. Ger. Kermes-wurzel. Linnaeus, in the first edition of his Species Plantarum, named the poke plant Phytolacca americana, but in a later edition reclassified this species and named it Phytolacca decandra. It is an herb with a large, branching, perennial root, often up to 20 to 25 cm. in diameter, which is fleshy, fibrous, whitish within, and covered with a thin brownish cork. The stems, which are annual, frequently grow to the height of 6 to 15 dm., and divide into numerous spreading branches, which are green when young, but become purple, especially in the upper portions, after the berries have ripened. The leaves are alternate, short petiolate, ovate-oblong, entire, acute and glabrous. The flowers are small, greenish-white and in long racemes. The raceme of flowers becomes a cluster of dark purple, almost black, shining compound berries flattened above and below, and divided into ten loculi, each containing one seed.

Poke is abundant in all parts of the United States, flourishing in soil containing lime salts, along fences, by the borders of woods, in newly cleared fields, and especially in the muck thrown up from the ditches or swamps. It also grows spontaneously in northern Africa and southern Europe, where, however, it is supposed to have been introduced from America. Its flowers begin to appear in July, and the fruit ripens in autumn. The magnitude of the poke weed, its large rich leaves, and its beautiful clusters of purple berries, often mingled upon the same branch with the green unripe fruit and the flowers still in bloom, render it one of the most striking of our native plants. The young shoots are much used as food early in the spring, boiled in the manner of asparagus. The leaves, berries, and root are used in medicine, but the latter is the most active. It should be dug up late in autumn, cut into thin transverse slices, and dried with a moderate heat. As its virtues are diminished by keeping, a new supply should be procured every year. The berries should be collected when perfectly ripe, and the leaves about the middle of the summer, when the foot-stalks begin to redden.

Commercial quantities of poke root have been gathered for the market chiefly in Indiana, North Carolina and Virginia. The berries (Phytolaccce Fructus, U. S. 1890, Phytolaccce. Baccce, U. S. 1880, Poke Berry) contain a succulent pulp, and yield upon pressure a large quantity of fine purplish, red juice; hence the popular name of ink-berries. They have a sweet, nauseous, slightly acrid taste, with little odor.

Description.—“Unground Phytolacca.—Cylindrical, or somewhat tapering, sparingly branched, from 3 to 7 cm. in thickness, mostly in transverse or longitudinal slices; externally weak brown to weak yellowish orange, finely longitudinally or spirally wrinkled, and thickly annulate with low ridges; cut surfaces characterized by alternating layers of fibro-vascular tissue and parenchyma, the layers of the latter being much retracted; fracture fibrous.

“Histology.—Cork, usually of 4 to 8 layers of thin-walled, tangentially elongated cells with suberized walls; secondary cortex, 7 to 10 rows of irregularly quadrangular cells containing starch or raphides of calcium oxalate or microcrystals; several concentric zones of open-collateral bundles separated by narrower zones of interstitial parenchyma, and the bundles of each zone separated by broad pericyclic rays; the whole developed by secondary meristems originating in the pericyle; tracheae average about 75 microns in width and bearing prominent, somewhat wrinkled, non-lignified tyloses.

“Powdered Phytolacca.—Color light yellowish brown to weak yellow; odor slight; taste sweetish, afterward highly acrid; sternutatory; starch grains simple or 2- to 3-compound, the individual grains up to 35 microns, though mostly less than 25 microns in diameter and with a distinct excentric hilum; calcium oxalate in raphides up to 50 microns in length; angular microcrystals; tracheae with elongated and slit-like bordered pores giving the vessels a reticulate appearance, or with diamond-shaped bordered pores; tracheids with scalariform or reticuloscalariform markings; fibers elongated, lignified, and thin-walled with oblique pores; fragments of cork and parenchyma tissue.

Constituents.—Goldstein et al. (/. A. Ph. A., 1937, 26, 306) were unable to find any alkaloid in phytolacca. They obtained a water-soluble material, containing a saponin, which was a local irritant and produced emesis. In the alcoholic extract they found a resin-like material which was a powerful depressant to the central nervous system and proved fatal to a cat in doses of 50 mg. per kilo.

Uses.—Macht (/. A. Ph. A., 1937, 26, 594) found that 5 to 10 cc. of fluidextract of poke root caused violent vomiting in cats followed by prostration. Doses of 1 cc. of the fluidextract, deprived of its alcohol, depressed the respiration and circulation of cats; 4 cc. stopped both heart and respiration. Its properties were known to the American Indians before the arrival of the white man. As an emetic it is slow in its operation, frequently not beginning to cause vomiting in less than one or two hours after it has been taken, and then continuing to act for a long time upon both the stomach and the bowels. The vomiting produced by it is said not to be attended with much pain or spasm, but narcotic effects have been observed by some physicians, such as drowsiness, vertigo, and dimness of vision. In overdoses it produces excessive vomiting and purging, attended with great prostration of strength, and sometimes with convulsions, and has, in several instances, proven fatal.

It is not fit for use as an emetic, but has been employed internally in chronic rheumatism and locally has been used in the form of ointment (a drachm to the ounce) in the treatment of parasitic skin diseases. There is, however, no satisfactory evidence that it is therapeutically useful and it is rarely prescribed by physicians. 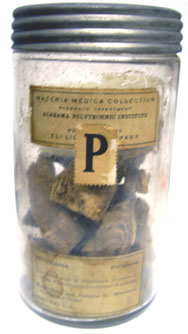 This information about Phytolacca or Poke Weed was taken from....

This is an image of Pytolacca Americana. Root sustem pf one-year-old plant. This was grown at the Medicinal Plant Garden of the University of Minnesota. From PHARMACOGNOSY by Gathercoal and Wirth 1947