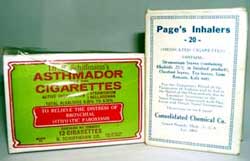 Some asthma cigarettes that were smoked containing stramonium

Stramonium was Smoked to Treat Asthma
As strange as it seems to us today people with asthma were given cigarettes containing belladonna and stramonium to smoke. It really worked!

These cigarettes contained Stramonium (Stinkweed) and Belladonna (Deadly Nightshade). Stramonium leaves contain the same drugs as Belladonna, which are anticholinergic chemicals. The anticholinergic drugs cause a decrease in mucous secretions, pupil dilation, decreased gastric motility and a dry mouth. This had a very good effect upon people with COPD, asthma, and Emphysema. Currently a drug that is widely used for those pulmonary conditions is Atrovent, which contains the anticholinergic drug ipratropium.

These cigarettes contained Stramonium (Stinkweed) and Belladonna (Deadly Nightshade). Stramonium leaves contain the same drugs as Belladonna, which are anticholinergic chemicals. The anticholinergic drugs cause a decrease in mucous secretions, pupil dilation, decreased gastric motility and a dry mouth. This had a very good effect upon people with COPD, asthma, and Emphysema. Currently a drug that is widely used for those pulmonary conditions is Atrovent, which contains the anticholinergic drug ipratropium.

Smoking herbs was one way that lung diseases were treated. The companies that made these medicated cigarettes were Dr. R. Schiffmann’s Asthmador, Page’s Inhalers and Marshall's Prepared Cubeb Cigarettes. As funny as it seems to smoke a cigarette to get a drug into your system remember that we are still inhaling albuteral, steroids, morphine and anticholinergics to treat lung problems. 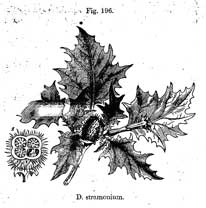 Stramonium botanical from an 1848 dispensatory

Uses.—Stramonium is so similar to belladonna in the symptoms produced by it, in its toxicity and its general physiological and therapeutic ac-tion, that the two drugs are practically identical. Furthermore, they are about the same strength in activity, so the preparations may be used in similar doses. Stramonium has been employed in all the conditions for which belladonna is more commonly used, but has acquired special repute in the treatment of asthma, this probably being due to the fact that the practice of smoking Datura ferox in that disease was introduced into Great Britain from the East Indies by General Gent, and that afterwards the English species was substituted for that employed in Hindostan. Formerly the roots were chiefly used, but at pres-ent the dried leaves and tops are exclusively employed. The beneficial effect is doubtless due to the presence of atropine which paralyzes the endings of the pulmonary branch of the vagus, thus relieving the bronchial spasm, for Gunther (W. K. W., 1911, p. 748) has shown that the smoke from a stramonium cigarette containing 1.25 Gm. of stramonium leaves contains as much as 0.5 mg. of atropine. The leaves may be made up into .cigarettes or smoked in a pipe, either with or without a mixture of tobacco; more commonly, however, the coarsely ground leaves are mixed with equal parts of potassium nitrate, in order to increase combustion, and burned in a saucer.

For further account of its medicinal properties see under Atropina.

The seeds are more powerful than the leaves. They were at one time officially recognized but the presence of a large amount of fixed oil made it difficult to extract them or to make stable preparations from them and the leaves have taken their place. They may be given in the dose of one-half to one grain (0.032-0.065 Gm.) twice a day.

The thornapple {Datura Stramonium) is an
annual plant, of rank and vigorous growth, usually about three feet high, but in a rich soil attains a height of six feet or more. The root is large, whitish, and furnished with numerous rootlets. The stem is erect, round, smooth, somewhat shining, simple below, dichotomous above, with numerous spreading branches. The leaves are petiolate, five or six inches long, of an ovate-triangular form, irregularly sinuate and toothed at the edges, unequal at the base, dark green on the upper surface, and pale beneath. The flowers are large, axillary, solitary, and peduncled, having a green, tubular, pentangular, five-toothed calyx, and a white, funnel-shaped corolla with a long tube, and a wavy plaited border, terminating in five acuminate teeth. The upper portion of the calyx falls with the deciduous parts of the flower, leaving its base, which becomes reflected and remains attached to the fruit. This is a large, fleshy, ovoid, four-valved, four-locular capsule, thickly covered with sharp spines, and containing numerous flattened, reriiform seeds, attached to a central placenta. It opens at the summit.

It is doubtful to what country D. Stramonium originally belonged; it grows wild in North and South America, southern Russia and Asia. In the United States it is usually found abundantly in the vicinity of cultivation frequenting dung heaps, the roadsides and commons, and other places where a rank soil is created by the de-posited refuse of towns and villages. Its flowers appear from May to July or August, according to the latitude. Where the plant grows abun-dantly, its vicinity may be detected by the rank odor which it diffuses to some distance around. Notwithstanding the abundance of the plant, it is being cultivated in order to obtain a drug which shall be of uniform quality.

Datura, tatula L. (purple stramonium), which is also recognized in the Br., is a plant of very similar character and distribution which seems to have originated in the American tropics but is now found widely naturalized in both Europe and America. It differs from the preceding spe-cies chiefly in having purple stems and flowers; the leaves are usually darker in color and fre-quently have purplish veins. D. tatula and D. Stramonium are now regarded by plant geneti-cists as forms of the same species, the difference in color of the stems and flowers being explained by a recessive gene.

Stramonium seeds are small, kidney-shaped, pitted and wrinkled, flattened on the sides, of a dark-brown almost black color, inodorous unless bruised, and of the bitter, nauseous taste of the leaves, with some degree of acrimony. The testa is dull brownish-black, hard, and encloses a cylindrical curved embryo, which is embedded in a whitish oily albumen. They are much more energetic in their action on the system than are the leaves.

All parts of the plant are active. The leaves, seeds, and root were formerly recognized by the U. S. P., the present U. S. P. recognizes both the leaves and the flowering tops. These may be gathered at any time from the appearance of the flowers till the autumnal frost. In this coun-try the plant is generally known by the name of Jamestown (Jimson) weed, derived probably from its having been first observed in the neigh-borhood of that old settlement in Virginia.

A. R. L. Dohme (Proc. A. Ph. A., 1894, p. 231) found that the stems contained the most alka-loid, the seeds next, then the leaves, and the roots the least of all. It is stated that leaves collected in the morning have a higher alkaloidal content than those picked in the evening and that leaves dried quickly at 60 to 65° C. retain their alkaloidal strength better than those dried slowly at room temperature. (Ph. Zentr., 1927, 68, 409.)

The drug of commerce is collected for the most part from wild plants. It is best gathered while the plants are in flower, in summer. The past supplies used in the United States have been obtained partly from native plants and to a large extent from various European countries, Algeria and Mexico. During 1939 there were imported from Belgium, Hungary, Italy and Yugoslavia 517,219 pounds of this drug. During 1940, owing to the reduction in shipping, only 89,439 pounds were imported from abroad, all of which arrived within the first six months. The present foreign supply comes largely from South America. This is inadequate for our needs and we shall be obliged to rely largely for our supply upon in-creased production of this drug in the Americas.

"Histology.—Leaf: Upper epidermis of thin-walled cells, with few stomata of solanaceous type and hairs; palisade, 1-layered, and resting upon a single row of small parenchyma cells extending through the middle of the blade, nearly every cell of the layer containing a rosette aggregate of calcium oxalate; spongy parenchyma loosely ar-ranged; lower epidermis similar to the upper but more uneven and with more stomata, the latter slightly elevated and with guard cells nearly cir-cular in outline and distinctly beaked. Midrib convex above and below, exhibiting an upper and lower epidermis with thick-walled cells, di-rectly beneath either of which is a zone of col-lenchyma, and in the center a meristele of bi-collateral bundles surrounded by parenchyma, many cells of which contain either microcrystals or prisms of calcium oxalate.

"Powdered Stramonium.—Bright green, or light olive brown to dusky yellowish green; epi-dermal cells of lamina with wavy radial walls; stomata elliptical, about 25 microns in length, usually with 3 neighboring cells, one smaller than the others; calcium oxalate in rosette aggregates, from 10 to 25 microns in diameter, or in prisms; non-glandular hairs of leaf few, 2- to 6-celled, attaining a length of about 500 microns, the basal cell being usually more than 50 microns in length and from 35 to 40 microns in diameter at the base, some of the cells more or less collapsed, the outer walls with numerous slight centrifugal projections; glandular hairs few, with 1- to 2-celled, usually curved stalks and 2- to 4-celled glandular heads; tracheae annular or spiral. Stem fragments with epidermal hairs up to 800 mi-crons in length, occasional pericyclic fibers, an-nular or spiral traches or tracheae with simple or bordered pores associated with wood paren-chyma or wood-fibers; midrib fragments with long, narrow, unequally thickened collenchyma-tous cells associated with parenchyma cells, some of the latter containing sphenoidal microcrystals and prisms." U. S.

The Br. says that the leaves are from 8 to 25 cm. long and from 7 to 20 cm. wide, varying in shape from ovate to triangular ovate, with short petioles. The flowers are solitary, having their origins at the forks of the stem, and about 7.5 cm. long, the corollas white (D. Stramonium} or purple (D. tatula), plicate, funnel-shaped. The description of the microscopical structure does not differ materially from that of the U. S.

Timmerman has made a comparative study of the structure of the leaves and seeds of Datura Stramonium, D. tatula, D. innoxia, D. metel and D, jastuosa and gives keys for distinguishing these powdered leaves and seeds (see P. /., 1927, 64, 742).

Assay.—"Proceed as directed under the Assay of Hyoscyamus, using 10 Gm. of Stramonium. Each cc. of fiftieth-normal acid is equivalent to 0.005787 Gm. of the alkaloids of Stramonium." U. S.

The Br. directs that the assay be carried out as described under Belladonna Leaf.

Adulterants.—E. M. Holmes states that the leaves of Xanthium macrocarpum were exten-sively substituted for stramonium leaves from Spain in 1918 (C. D., 1920, 92, 908). The most common adulterants of American stramonium have been the leaves of Xanthium species, espe-cially X. italicum, and excess stems. The former may be detected by their absence of rosette crys-tals and presence of rod-shaped crystals of cal-cium oxalate and especially by their short, non-glandular hairs, each exhibiting a broad basal cell and a pointed, frequently bent terminal cell.

Constituents.—Geiger and Hesse in 1833 suc-ceeded in isolating an alkaloid, to which the name daturine was given and which Trommsdorff has repeatedly procured by their process.

As was first shown by Von Planta in 1852, and since confirmed by many authorities, datu-rine is identical with hyoscyamine (see Bella-donna). There is also present traces of scopol-amine but not in large enough quantity to influ-ence the physiological activity.

Chou (Chinese J. Physiol, 1935, 9, 77) iso-lated from D. Stramonium cultivated in China hyoscine, hyoscyamine, atropine, and two neutral principles, which he has denominated datugen, CisH2o02, and datugenin, Ci6H220s. Gerard (see /. P. C., 1892, p. 8) studied daturic acid obtained from the fixed oil of stramonium seed and assigned to it the formula CiTHs-iOs— the only naturally occurring acid having an un-even number of carbon atoms. There is no posi-tive proof that this acid exists, some investigators claiming it to be a mixture of acids having even numbers of carbon atoms (see Clark, /. A. Ph.' A., 1935, 24, 843, and Manjunath, /. Indian Chem. Soc., 1935, 12, 400).