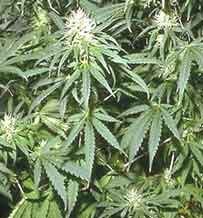 This plant promises to be an important article of the Materia Medica. Those in this country who have found it inert must blame the preparation they used.

The Greek physicians were not acquainted with its remarkable narcotic properties; for, though Dioscorides says tbe expressed juice of the seed allays earache when dropped into the ear, he takes no notice of the employment of the herb itself as an internal remedy. The Hindoos were conversant with its virtues so early as the year 600; and the Persians not long afterwards, as well as the Arabians at a subsequent period, employed it as a sedative and anodyne in diseases, and also to excite intoxication. In Europe, although repeatedly mentioned by naturalists and travellers during the last two centuries, it did not come into use in medical practice till Dr. O'Shaughnessy, of Calcutta, published a precise account of its virtues in 1839.

The Cannabis Indica, first established as a species by Lamarck, belongs to the Natural Family Urticacese of Lindley and other botanists, and to the Linnaean daises and order Dicecia Pentandria. The external characters which separate it from the Cannabis saliva, common hemp of Europe, are not satisfactory; and good authorities regard the two plants as mere varieties of one species, modified slightly by climate.

The Indian plant is a herbaceous annual, three or four feet in height. The leaves are covered with a resinoid varnish, and have a peculiar, rather heavy odour. The stem-bark consists of long, tough fibres, in universal use for making cordage. The seeds contain a fixed oilj which is inert. The European plant has no resinous varnish on its leaves, but presents scarcely any other distinction from that of India.

Various drugs obtained from Indian hemp are met with in Eastern trade. The Haschisch of the Arabs consists of the tops and tender parts only of the plant, collected immediately after inflorescence, arid simply dried (Steeze, in Buchner's Repert., xxxvii. ii.). The Bhang of the East-Indies is composed of the dried larger leaves and capsules (O'Shaughnessy
on Indian Hemp, 1839). Gunjah is the whole herb, dried after flowering, without removal of its resin; and is usually made up in bundles two feet long, and three inches in diameter. Churrus is a resinoid substance said to be obtained from the growing plant, either by removing the resinous varnish from the leaves with the hand, or more generally by making men, clothed in leather, brush briskly through the hemp-fields, and then scraping the resin "C. sativa. from their dress (Ibidem). Other drugs, sold in the East for smoking or swallowing, are prepared from these by artificial processes. The only articles familiarly known in this country are the Gunjah and Churrus of India, and latterly a superior alcoholic extract prepared from the herb at Calcutta, and now also manufactured in London.

Gunjah, as sent to me by Dr. O'Shaughnessy, consists of the stems, leaf-stalks, and leaves, carefully dried, and the latter crushed into long, narrow, grayish-green masses somewhat of the size and form of the fingers. It has a faint, peculiar, heavy odour, and a corresponding taste, feeble, and mingled with slight bitterness. Churrus, as obtained from the same source, is in roundish masses, towards the size of a hen's egg, grayish-yellow, friable, of the same odour and taste as gunjah, but stronger, and by no means a pure resin, but obviously consisting of a large proportion of fine fragments and dust of the plant. The sensible and active properties of both these articles are said to be much impaired by time; and in this way their apparent inactivity in European practice is thought to be accounted for.

Indian hemp has not yet been subjected to a careful proximate analysis. The dried herb does not part with its properties to water. Even proof-spirit is a feeble solvent; but rectified-spirit dissolves its active part with facility. Oils and fats aided by heat, seem also good solvents; at least heated butter is the menstruum for preparing the basis of a familiar preparation in India, a sort of confection called there Majoon. The alcoholic solution yields an active extract in the usual way. The best preparation yet used in this country is an alcoholic extract prepared by Mr. Andrew Robertson of Calcutta, by forcing the steam of rectified-spirit downwards through the dried herb contained in a cask, and distilling off the alcohol from the tincture which trickles from the condenser at the bottom. Gunjah yields about a fourteenth of its weight of this extract. As sent to me by Mr. Robertson, it is resinoid, green when spread out, of a strong hemp odour and taste, and of undoubted activity, which it has retained without apparent diminution for two years. The usual form in which it is employed in this city is that of tincture made with an ounce of extract and twenty fluidounces of rectified-spirit. I have also used it in the forms of pill and emulsion. The active constituent of Indian hemp is either a resin, or a principle hitherto inseparably united (of a resin. Schlesinger obtained from European hemp a number of unimportant inert principles, and five per cent, of a bitterish somewhat acrid resin. The Messrs. Smith, druggists, of this city, satisfied themselves that the resin obtained from Indian hemp concentrates in itself the whole properties of the plant; and they give the following process for pre-paring it. Digest bruised gunjah in successive portions of warm water till the expressed water comes away colourless ; and again for two, days at a moderate heat in a solution of carbonate of soda, in the proportion of one part of salt to two of gunjah. Colouring matter, chlorophyll, and inert concrete oil being thus removed, express and wash the residuum, dry it, and exhaust it by percolation with rectified-spirit. Agitate with the tincture milk of lime containing an ounce of lime for- every pound of gunjah ; and after filtration throw down excess of lime with a little sulphuric acid. Agitate with the filtered liquor, a little animal charcoal, which is afterwards to be removed by filtration. Distil off most of the spirit, add to the residual tincture twice its weight of water in a porcelain basin, and let the remaining spirit evaporate gradually. Lastly, wash the resin with fresh water till it comes away neither acid nor bitter; and dry the resin in thin layers. This resin retains the peculiar taste and odour of the gunjah. A temperature of 180° F., acting for eight hours on thin layers of it exposed to the air, does not impair its activity. It is readily dissolved by rectified-spirit. Dry gunjah yields six or seven per cent, of it; and its strength as a narcotic corresponds with this proportion.

Actions and Uses of Cannabis

Numerous observers have described Indian hemp as producing in the natives of the East, who familiarly use it instead of intoxicating spirits, sometimes a heavy, lazy state of agreeable reverie, from which the individual may be easily roused to discharge any simple duty,—sometimes a cheerful, active state of inebriation causing him to dance, sing, and laugh, provoking the venereal appetite, and increasing the desire for food,— and sometimes a quarrelsome drunkenness, leading to acts of violence. During this condition, pain is assuaged and spasm arrested. Sleep usually supervenes in three hours ; and when this passes off, no nausea, loss of appetite, or constipation follows; no other symptom than slight vertigo. The frequent use of it, however, brutalizes the intellect. On trying Mr. Robertson's extract once for toothache, I found that about four grains taken at three A. M., caused in an hour cessation of pain, a pleasant numbness in the limbs, giddiness, a rapid succession of unassociated ideas and impossibility to follow a train of thought, frequent intervals of sleep, and slight increase in the force of the pulse. Next morning there was an ordinary appetite, much torpidity, great defect and shortness of memory, extreme apparent protraction of time, but no peculiarity of articulation or other effect; and these symptoms lasted till 2 P. M., when they ceased entirely in a few minutes after taking lemonade. In some instances a condition like catalepsy has been produced, in others a state resembling delirium tremens. In my own professional experience it has produced sleep, relieved pain, and arrested spasm ; and I have never observed any disagreeable effect during or after its action, except that in one instance it excited, as its operation,commenced, an alarming sense of occasional succussions in the brain. Dr. O'Shaughnessy found that carnivorous animals were easily intoxicated by it, but that graminivorous animals were affected with greater difficulty. No inquiry has yet been made on the effects of large doses.——The hemp grown in Europe is thought to be inert, and as its leaves are not varnished with resin, it is- probably feeble compared with the Indian plant; but the only careful experiments with it which I have seen detailed, those of Parent-Duchatelet, are not at all conclusive (Ann. d'Hyg. publ.)

Indian hemp has been used as an antispasmodic in hydrophobia, tetanus, malignant cholera, and infantile convulsions, with marked relief in repeated 'instances. Some cases of tetanus appear to have been cured in the East-Indies by it; favourable cases have been reported also in this country; and my colleague, Professor Miller, had a case under his care which proved successful without any other important remedy. It has also been employed with success as an anodyne in chronic rheumatism, toothache, and other varieties of neuralgia. I have used it a good deal, and with decided success, in diseases at large, to obtain sleep. On the whole, it is a remedy which deserves a more extensive inquiry than any hitherto instituted.

The dose of the alcoholic extract is from two to five grains, as a hypnotic, anodyne, and antispasmodic. On account of its insolubility, it should be given either in the form of emulsion, or in that of tincture dropped into water immediately before administration. An emulsion may be made by triturating five grains in a warm mortar with fifteen minims of olive-oil, and then adding gradually a fluidrachm of mucilage and two fiuidounces of water (Bromfield). ———The tincture of the extract, dispensed by the Edinburgh druggists, is given, in a dose varying from fifteen to forty drops, with a little water, sometimes sweetened with sugar. The pure resin of Messrs. Smith appeared to them to be very active in the dose of two-thirds of a grain, though made from old gunjah.

This information was taken from....