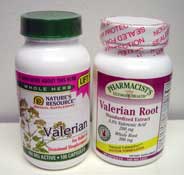 * Valerian has a strong unappealing aroma
* Valerian was used as a perfume in 16th century Europe
* Valerian has been used for its sedative properties for centuries
* Valerian is still widely used in Europe as a sleep aid.
* There is irrefutable evidence that valerian has sedation properties
* Valerian contains many different chemicals including GABA in aqueous solutions

Some of the Known Chemicals of Valerian

- The Aqueous Extract Of Valerian Contains GABA That May Not Cross The Blood-Brain Barrier.

Valerian (U.S.P. 1820 to 1942; N.F. 1942 to 1950) consists of the dried rhizome and roots of Valeriana officinalis Linne (Fam. Valerianacese). Valerianus, emperor of Rome, A.D. 253 to 260, first used the plant in medicine, hence the plant name given in the 9th century A.D. The plant is a perennial herb indigenous to Europe and Asia and cultivated in Holland, Germany, England and the United States, being more or less naturalized in this country as far south as New York and New Jersey. The rhizome is collected in autumn, cut into longitudinal slices and dried by artificial heat. There are several commercial varieties and it is said that some of the drug is derived from Valeriana sylvatica. Most of the commercial supply comes from Belgium and Holland. During medieval days valerian was used in cookery for its delightful flavor, and in the 16th century was accepted as a perfume, as it is employed in the Orient today.

CONSTITUENTS.—A volatile oil, 0.5 to 2 per cent, composed of bornyl valerate (9.5 per cent), bornyl formate, bornyl acetate, bornyl butyrate, borneol, pinene, camphene, and a sesquiterpene; the alkaloids chatinine and valerine, a glycoside, a resin (all physiologically active); free formic and acetic acids and malates; tannin; saccharose; starch. Total ash, 4.3 per cent; acid-insoluble ash, 0.5 per cent. The valerian odor is due to isovaleric acid, formed from bornyl acetate by an oxydase during the drying of the drug.

USES AND DOSE.—Valerian is used as an antispasmodic and a nervine. Usual dose, 750 mg.

Valerian Oil or Oleum Valerianse (U.S.P. 1851 to 1894) is the volatile oil distilled from the rhizome and root of Valeriana officinalis Linne. The freshly gathered root is crushed or ground and distilled with water, the yield being larger from plants grown in dry soils. When recently prepared, the oil is yellowish or greenish, of a mild odor and a neutral reaction. On exposure to air it becomes brownish, of a strong odor and with an acid reaction. It is readily soluble in alcohol. Its constituents are given under Valerian. It was used as a sedative for hysteria.