The Roots of Soderlund Village Drug
Soderlund Village Drug can trace its roots back over 110 years in the historic Saint Peter community. The pharmacy has had many owners and various names over the years but one thing has remained constant... the drugstore and the community are part of each other.

Soderlund Village Drug actually began with the immigration of the Soderlund family to America back in 1892. Upon arriving in America from Sweden the Soderlunds settled in Minneapolis. The oldest daughter of the family, Lina Soderlund found a job as an apprentice pharmacist. She started working in a Finnish pharmacy in downtown Minneapolis around 1899.

Back in that era the pharmacy profession was not taught in college but rather by a period of apprenticeship. After the apprenticeship a person would then be considered a druggist since they had learned the art of compounding. 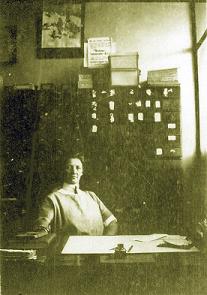 Lina Soderlund Became a Pharmacist
While working as a pharmacist, Lina Söderlund would compound various medications from herbs, plants and even insects for her patients. Back then some insects like Spanish Flies, Cochineal and Chinese Blistering Beetles were used for medical purposes. Over the years Lina became a very accomplished compounding pharmacist.

My father, Bill Soderlund, Sr., would visit his aunt Lina at the pharmacy. The sweet aroma and the scientific atmosphere of the pharmacy instilled in him a desire to follow in her footsteps and some day become a pharmacist.

Bill Soderlund, Sr., Continues the Legacy
In 1954 my father began his studies at the University of Minnesota College of Pharmacy. His was the first class to go from a four to a five-year curriculum. Originally a pharmacist was trained on the job in an apprenticeship program. Eventually, around 1920, the state of Minnesota implemented a licensing requirement that mandated a 2-year college degree. The length of the pharmacy course continued to expand to its present 6-year program. 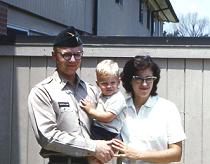 Learning the Profession at the Soda Fountain
My dad went to work for Fred Hay Drug in North Minneapolis while he attended college. Fred was an assistant pharmacist who owned his own drugstore. Fred took and passed the test and became a full pharmacist while my dad was working for him.

While working at Fred Hay Drug, my father spent most of his time working the soda fountain. Even though he was a pharmacist intern he rarely filled any prescriptions because Fred wouldn't allow it. But if a medication cost over $5.00 Fred would make my father present it to the customer while he hid in the back room. Back then a prescription price never changed. When a doctor wrote a prescription there wasn't really any expiration so a patient would just keep getting the medication indefinitely.

Dad was one of the first pharmacists to promote generic drugs back in the 1960's. The Minnesota Board of Pharmacy was quite upset with him for doing so. Back then it was unheard of for a pharmacist to substitute, without a doctor's order, a generic for a name-brand drug. But my dad held his ground and continued to dispense generics to save his patients money. 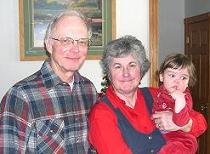 Dad Goes Into Business for Himself
Bill Soderlund, Sr., eventually bought "Village Drug" in Northfield Minnesota in 1980. The business included a drugstore and a Bridgeman's restaurant. My mom, Joan Soderlund, managed the restaurant and my dad ran the pharmacy. During the early 1980's Snyder Drug was expanding rapidly and approached my dad and told him, "if you don't become a Snyder Drug franchise we will build one right next to you". That motivated him to partner with them.

Dad ran a successful pharmacy in Northfield and in time decided to buy another drugstore in Saint Peter Minnesota from Bob and Gary Swedberg. It was at this time that he asked me to manage the St. Peter pharmacy. He bought Swedberg Drug on September 15th, 1986 and changed the name to "Village Snyder Drug". At the time I wasn't a pharmacist so it was a struggle to manage the pharmacy aspect of the business. My brother Pat Soderlund was a pharmacist and he ran the pharmacy and I devoted most of my attention to the front end of the drugstore.

We Become more Independent
In 1991 my father and I decided to part company with Snyder Drug so we changed the name of the drugstore to just "Village Drug". I was glad to leave Snyder Drug behind because I always believed that the key to success for the little guy is to avoid being like everyone else. I thought it was important to find your niche and be yourself. It was at this point that we became independent of corporate America and we started the journey back to our roots.

As time passed I became more convinced that I couldn't effectively manage the drugstore unless I became a pharmacist. So in 1992 I began the pursuit of the title "pharmacist" in earnest and graduated from Drake College of Pharmacy in 1995.

Soderlund Village Drug is Born
I bought the drugstore from my father in 1996 and made some improvements. Additionally I changed the name to "Soderlund Village Drug" in honor of my father. We remodeled the pharmacy and began compounding with passion. Pharmacist Noelle Buckley and I worked together until the business grew to the point that we needed to hire another pharmacist. That's when I called my former classmate Chris Daniels and begged him to come to work for me.

Big changes for Soderlund Village Drug
We remodeled the current pharmacy in 1999 and greatly expanded our compounding area and facility. We added a sterile hood for making injections and purchased a lot of compounding equipment to make us more proficient. In 2002 we decided to begin a pharmacy museum so I started collecting pharmacy antiques and put them on display in the drugstore. In 2003 we began giving away free 1919 root beer and purchased an antique Liquid Carbonic soda fountain complete with a 1911 back-bar. In 2004 we got our new logo and decided to create a website for the pharmacy www.villagedrug.com and a website for the drugstore museum www.drugstoremuseum.com

Thank You for Our Success!
As I reflect upon the history of Soderlund Village Drug I am compelled to consider the twists of fortune and Providence that have occurred to bring me to this point. If it wasn't for my great-great Aunt Lina Soderlund or my dad Bill Soderlund, Sr., or the wonderful community of Saint Peter or of each and every one of my loyal customers... All I can say is thank you very much!

Bob Swedberg
I had the opportunity to work with Bob Swedberg and I'll tell you that it was a real learning experience. Bob Swedberg is truly a pharmacist's pharmacist. He was never afraid to work long hours and he really took great care of his patients. One day I actually asked Bob to let me interview him about the secrets to his success. It was after that tutelage that I embarked on the quest to become a pharmacist. I owe much to Bob Swedberg and the example he set will be part of my pharmacy practice for the rest of my life. For more information about Bob Swedberg and Swedberg Drug click on this link. 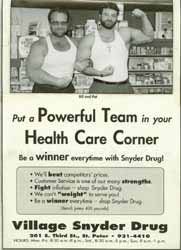 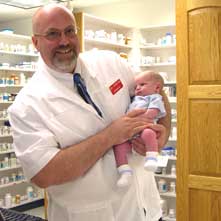 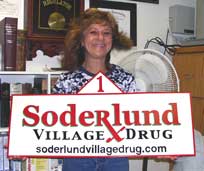